The Saga of Laurence 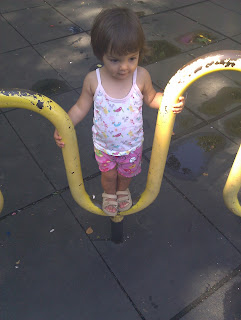 I first ran into Laurence1 at the playground about a week ago. He is a bright, happy, eight year old, and unusually friendly. He seemed to connect to my daughter, and to me as well, and told me all about his loves (basketball, his little brother) and hates (swimming class, third grade testing) and peppered me with questions ("how old are you? thirty? forty? fifty? Are you a photographer? Are you Japanese?") and about Aki, who he called Hockey, no matter how much I tried to correct him.

He seemed sweet, if a little annoying, very hyper but otherwise okay.  Before we left, he asked how often I came to the playground, and I mentioned that we usually came in the mornings. He asked if we could start coming on Tuesday and Thursday afternoons, and I demurred. Soon after that we took off.

This morning Aki and I headed to the playground, and who should we see on our way there, but Laurence and his little brother. He immediately ran up and said hi. He looked like he was about to jump into my arms, so I took a step back. "Hello Laurence, it's good to see you."

"You came! I didn't think I'd see you again, but you came!" he shouted. He then began filling me in on his week, and running around us, until his nanny finally found him, and without looking at me, shoed him off in the direction of the playground.

Aki and I made our way there, and when we arrived, Laurence was at the gate, waiting to meet us. I have to say that his enthusiasm made me a little uncomfortable. I turned down all of his offers to pick Aki up, or to carry her anywhere. But otherwise, I let Laurence, and eventually his little brother (who is six) play with, and around Aki. He told me a little about his mom, and nothing about his dad (I didn't ask) and it seemed to me that, whatever his home situation, he was clearly desperate for some adult male to talk to. So we chatted, and I kept an eye on Aki.

Eventually his nanny came nearby, and again without looking at or talking to me, called him over in an angry tone and began chastising him in Spanish. I could guess what she was saying by his posture and the tone of her voice.

Eventually he came by again. "I'm not supposed to talk to you anymore, because my nanny says you're a stranger."

"Well, I'll still talk to you. I don't care," he said, and then his younger brother told me his mom's name, and their address, and his birthday. I continued to keep an eye on Aki, and speak to Lawrence or his brother when they snuck over to talk to me, but I also reminded them that their nanny wanted them to be safe. At one point I took some photos of Aki playing in the fountain. "Do you want to take pictures of me?" Lawrence asked. I told him that under no circumstances would I, or could I take any pictures of any of the other kids at the playground, because I don't have his or their parents' permission. I hoped he understood that that's not right, and not something an adult should do.

I do wish the nanny had come over to speak to me. I didn't feel like I had much right, or authority to approach her, given that none of this interest was coming from my side. After about half an hour, she decided they needed to leave, and gestured at Lawrence and his brother from about 20 feet away. Lawrence told me that this was his last day coming to the playground -- he only came after swim lessons at the nearby pool. They had just ended, and so he wouldn't be back until next summer.

The quandary here, of course, is that on the one hand I'm a perfectly nice guy. There's no way that I would do anything to harm Lawrence. And he clearly wants/needs some adult companionship beyond his mom and his nanny. I was happy to chat with him and be friends while hanging out at the park.  Even for just a little while he seemed to relish having a grownup to talk to and to take him seriously. And I have no evidence, but I suspect if I was a SAHM instead of a SAHD, the nanny wouldn't have a problem with us hanging out.

On the other hand, I don't necessarily disagree with her. Lawrence probably shouldn't be nearly jumping into the arms of strange men that hang around the playground, regardless of how perfectly nice one or most of them may be. I don't want Aki to be that super-friendly with anyone I haven't met when she's eight. I absolutely get that.

Maybe if I'd been thinking it through I would have gone to the nanny, regardless of how awkward the situation, and suggested that Lawrence join a Big Brothers mentoring program. He clearly would love it. As it stands, I'll have to wait until next summer to bring it up. I hope he stays safe.

I can understand the problem as well, a good friend who has been doing great volunteer work in a local school with a great number of kids is not being invited back this year because of among other reasons he "hugged" some of the kids. I know him pretty well and I know enough of the neighborhood to know those kids probably needed the hugs more than they needed to be protected from him. But that's the problem, rules are one size that doesn't fit anyone perfectly. It will be another generation or so before we find out how this policy doesn't work.