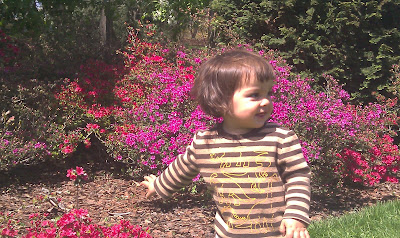 I've been performing magic tricks for Aki. Not good ones: standard kooky uncle fare: "grabbing" a small toy with one hand, and making it appear in another hand, juggling a little, making things appear from behind her ears. I do the wavy trick with a wooden spoon, where it looks like it's bending.

The thing is, this doesn't surprise her in the least. Why should it? She's eighteen months old. She recently began trying out three- and four-syllable words (she's got, like, 80% of "Happy Birthday" and it was momentous). She says there's no poo in her pants when there is clearly poo in her pants.

What I mean is she's still a long ways from the incessant "why" phase, which will be when she starts understanding what things should be. And that will be when she can be surprised by something that shouldn't be. But I have fun doing them, mostly because I like watching her reactions, or her non-reactions. Why shouldn't spoons be bendy? Why shouldn't toys hang in the air sometimes? The more I think about Aki, and what she's going through, and try to remember what my experiences were like when I was very young, what strikes me is how much growing is essentially a loss of magic. Not the bad-uncle magic (though that too), but the actual magic. The anything-is-possible kind. Growing up is understanding. It's having experiences, and using those experiences to form a sense of what is possible, and what is not. And hopefully it's buttressing those experiences with other people's experiences through books and radio and yes, even a little television.

Right now, eighteen months in, Aki has just started to figure out that some sounds mean things and others don't. She can walk, and she trusts that she won't fall off the planet when she goes down the slide. And she's trying lots of things out — grabbing them, tasting them, smelling them, banging them on other things. But the solidity of everything is still an open question. It's equally possible that I can juggle, and that I can make toys appear and disappear, or that a spoon is hard sometimes and bendy other times.

When I was five, I had an imaginary friend named Mr. Muckluck, who was from Alaska. When I was nine or ten, I read a book about a guy who walks on water because he believes he can walk on water. I spent months, every night, in my bathtub, trying to believe hard enough to walk on water too. When I was fourteen I still liked to bust clouds on nice days, because it worked often enough that I could still believe it.  Much of my childhood was spent interacting with magic, those kinds and other kinds. But slowly I learned what did and didn't work in terms of my world, if not always, at least most of the time.

It feels like growing up has been a long process of differentiating the possible from the impossible. And if my world feels surer, it's also that much less exciting because of what I understand.

But here's Aki. As I'm writing this, she just tried to stick her stuffed rabbit to the wall. It didn't work, but the sticker next to it stuck. So who knows. Anything is still possible.